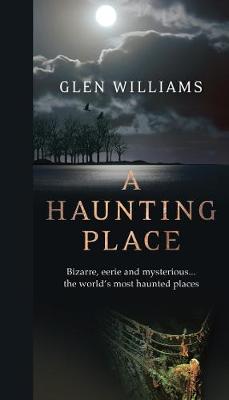 A Haunting Place explores both mysterious and ghostly encounters in locations around the world. Glen Williams talks to the people who swear they have been visited by the dead; he visits the places of these confrontations with the supernatural to uncover the story of the 'ghosts' and the people and places they haunt. He interviews teams of ghost busters using technology to solve the mystery of ghosts and talks to film makers who can't leave the theme of hauntings alone. The author visits houses, hotels, schools, castles, hospitals, cellars, sheds, stables and all manner of buildings - ghostly apparitions run rampant in the seemingly normal everyday. Eerie locations such as old mills, windswept quarantine stations, run-down and abandoned mental hospitals, derelict pubs, lonely roads and empty houses reveal their terrifying secrets. Why is it that people are so fascinated with the unknown? The mysterious? The supernatural? Our captivation With the paranormal and the unexplained is never ending. The thought of ghosts floating about within our existence arouses fear, a sense of wonder and the longing for logical explanations that never quite make sense.
A 2005 Gallup survey revealed three out of four Americans profess at least one paranormal belief. The most popular belief is extrasensory perception (ESP) mentioned by 41%, followed closely by belief in haunted houses (37%) and that ghosts/spirits of dead people can come back in certain places/ situations (32%). Supernatural ideology exists in many different cultures and a belief in ghosts is one of the most common; this, in part, relates to a belief, or hope in the afterlife, a tenet of most major religions.