All We Are Saying: The Last Major Interview with John Lennonand 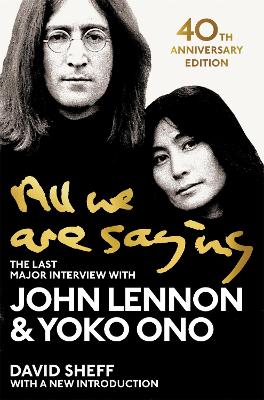 Originally published in Playboy in 1981 just after John Lennon's assassination, All We Are Saying is a rich, vivid, complete interview with Lennon and Yoko Ono, covering art, creativity, the music business, childhood beginnings, privacy, how the Beatles broke up, how Lennon and McCartney collaborated (or didn't) on songs, parenthood, money, feminism, religion, and insecurity. Of course, at the heart of the conversation is the deep romantic and spiritual bond between Lennon and Ono.

Sheff's insightful questions set the tone for Lennon's responses and his presence sets the scene, as he goes through the kitchen door of Lennon and Yoko's apartment in the Dakota and observes moments at Lennon's famous white piano and the rock star's work at the stove, making them grilled cheese sandwiches. Sheff's new introduction looks at his forty-year-old interview afresh, and examines how what he learned from Lennon has resonated with him as a man and a parent. This is a knockout interview: unguarded, wide-ranging, alternately frisky and intense.