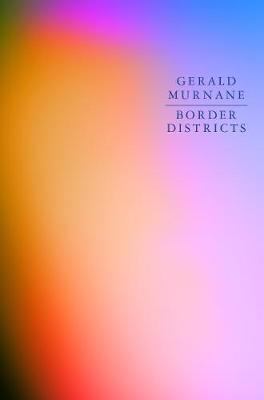 Winner of the 2018 Prime Minister's Literary Award for Fiction

A new work by a master of contemporary
Australian fiction, highly regarded overseas, but little-known here.
Giramondo's publication of Border
Districts, and the retrospective volume Collected
Short Fiction (early next year) is a collaboration with the distinguished
New York publisher Farrar Straus Giroux.

Conceived as Gerald
Murnane's last work of fiction, Border
Districts was written after the author moved from Melbourne to a small town
on the western edge of the Wimmera plains, near the border with South
Australia. The narrator of this fiction has made a similar move, from a capital
city to a remote town in the border country, where he intends to spend the last
years of his life. It is a time for exploring the enduring elements of his
experience, as these exist in his mind, images whose persistence is assured,
but whose significance needs to be rediscovered. Readers of Murnane's earlier
work will recognise some of these images: the dark-haired young woman at a
window; the ancestral house set in grasslands; coloured glass, marbles,
goldfish, the outfits of jockeys. Murnane's images often draw their power from
the light that falls upon them from a distant or mysterious source. But he also
considers the possibility that the mind casts its own light, imbuing the images
in the observer's mind with the colours of his soul.

As Murnane's
narrator declares, 'the mind is a place best viewed from borderlands'. In this
work, Border Districts also refers to
the border country between life and death; and there is another meaning, in the
narrator's discovery of others who might share his world, even though they
enter it from a different direction, across the border districts which separate,
or unite, two human beings.

Gerald
Murnane is the author of eleven books of fiction, including Tamarisk Row, Inland,
Barley Patch, A History of Books and A Million Windows,
and a collection of essays, Invisible Yet Enduring Lilacs, which have
been published by Giramondo. He is a recipient of the Patrick White Literary
Award, the Melbourne Prize for Literature, the Adelaide Festival Literature
Award for Innovation and the Victorian Premier's Literary Award.

'A genius on the level of Beckett' - Teju Cole

'The emotional conviction...is so intense, the somber
lyricism so moving, the intelligence behind the chiseled sentences so
undeniable, that we suspend all disbelief.' - J.M. Coetzee