Cities Then and Now 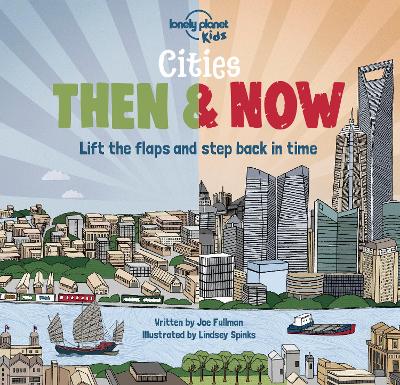 This fun and colourful lift-the-flap book gives a unique insight into how cities looked in the past, compared to how they look now. With ancient cities and ruins including Pompeii, Great Zimbabwe and Babylon, discover how history has shaped our planet's urban areas and changed them over time.

Thebes in Egypt (c. 900 BCE) - Shows the ancient Egyptian capital of Thebes compared to the modern city of Luxor. Featured elements include the Temple of Karnak, the Temple of Luxor and King Tutankahmun's Tomb in the Valley of the Kings

Constantinople, Turkey (c. 550) - Highlights the capital of the Eastern Roman/Byzantine Empire as it looked at its peak in the 6th century, with its giant hippodrome compared with the modern city of Istanbul

Aarhus, Denmark (c. 950) - Showcases the Viking city of Aarhus as it was in the 10th century, compared to the port city that has grown up in its place

Tenochtitlan, Mexico (c. 1521) - Exhibits the vast capital of the Aztecs as it was at the moment of the Spanish invasion compared to the cosmopolitan Mexico City which was built on top of it

Rio de Janeiro, Brazil (c. 1565) - Explores the Brazilian city as it looked at the moment of its foundation, still largely covered in tropical jungle, to how it looks now

London, United Kingdom (c. 1666) - Delves into how London has changed since the time of the Great Fire of London to the present day

And much, much more!

About Lonely Planet Kids: Lonely Planet Kids - an imprint of the world's leading travel authority Lonely Planet - published its first book in 2011. Over the past 45 years, Lonely Planet has grown a dedicated global community of travellers, many of whom are now sharing a passion for exploration with their children. Lonely Planet Kids educates and encourages young readers at home and in school to learn about the world with engaging books on culture, sociology, geography, nature, history, space and more. We want to inspire the next generation of global citizens and help kids and their parents to approach life in a way that makes every day an adventure. Come explore!