Kidnapped The Crime that Shocked the Nation 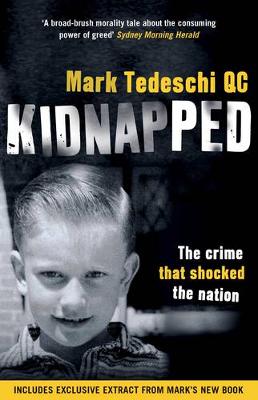 The story of Australia's first known kidnapping of a child for ransom - now with an exclusive extract from Mark Tedeschi's new book, Murder at Myall Creek - The Trial that Defined a Nation

When eight-year-old Graeme Thorne was kidnapped on his way to school in July 1960, Australia was gripped with fear and loathing. What monster would dare take financial advantage of the most treasured bond of love - between parent and child? Just weeks earlier, Graeme's parents had won a fortune in the Opera House Lottery, and this had attracted the attention of the perpetrator, Stephen Bradley.

Bradley was a most unlikely kidnapper, however his greed for the windfall saw him cast aside any sympathy for his victim or his victim's family, and drove him to take brazen risks with the life of his young captive.

Kidnapped tells the astounding true story of how this crime was planned and committed, and describes the extraordinary police investigation that was launched to track the criminal down. Mark Tedeschi explores the mind of the intriguing and seriously flawed Stephen Bradley, and also the points of view of the victim, his family - and the police, whose work pioneered the use of many techniques that are now considered commonplace, marking the beginning of modern-day forensic science in Australia.

Using his powerful research and storytelling skills, Mark Tedeschi reveals one of Australia's greatest true crime dramas, and what can only be described as the trial of the 20th Century.

`With powerful research and storytelling skills, Tedeschi has delivered a gripping story about one of Australia's greatest, and heartbreaking, true crime dramas.' Better Reading

`Remarkably researched so as to explain one of Australia's most extra ordinary criminal cases.' Chester Porter QC

`A detailed and compelling account of events, unfolded with Tedeschi's customary forensic skill and interspersed with interpretation and analysis that informs and provokes.' Nicholas Cowdery AM QC

`An utterly compelling account of the kidnap and murder of schoolboy Graeme Thorne from an author with unparalleled knowledge of the investigation and prosecution of crimes which have terrified Australians.' Margaret Cunneen SC, Deputy Senior Crown Prosecutor

`A study of kidnapper Bradley . . . and a picture of an insular Australia encountering a strand of icy pragmatism direct from war-damaged Old Europe.' Peter Doyle, writer, academic, and occasional curator at Sydney's Justice & Police Museum