Looking into the Abyss 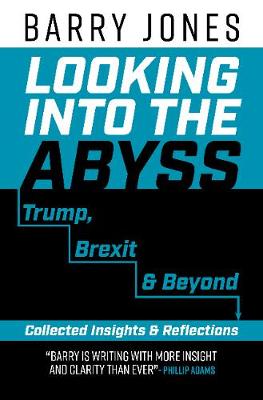 COLLECTION OF REFLECTIVE ESSAYS ON TIMELY AND TIMELESS ISSUES
THOUGHT-PROVOKING SOCIAL AND POLITICAL COMMENTARY
This collection of insightful articles, essays and speeches from Barry Jones
follows the acclaimed Knowledge Courage Leadership (2016) and includes
refl ections on the big political and social issues and concerns locally,
nationally and internationally.
Understand more about key issues including science, evidence v. opinion,
euthanasia/medically assisted dying, our failure to grasp the Republic issue,
redefi ning politics in an age of toxicity and moral vacuum, the existential
threat to democracy and what we must do to preserve it, 'fake news', the
Age of Trump, and much more.
Looking Into The Abyss is a rivetting and compelling read, written in Barry's
easy fl owing and fact-based style. Barry is writing better than ever!
About the Author: Barry Jones is an international and Australian polymath, writer,
lawyer, social activist, quiz champion, former politician and Minister for Science. Born
in Geelong (1932), educated at Melbourne University, Barry was a public servant, high
school teacher, television and radio performer, university lecturer and lawyer before
serving as a Labor MP in the Victorian Parliament 1972-77 and the Australian House of
Representatives 1977-98. Awarded an AO in 1993, he was named as one of Australia's
100 'living national treasures' in 1998 and was elected a Visiting Fellow Commoner of
Trinity College, Cambridge in 1999. In 2014 he received an AC for services 'as a leading
intellectual in Australian public life'. He is the author of Dictionary of World Biography and
Knowledge Courage Leadership also available through Wilkinson Publishing.