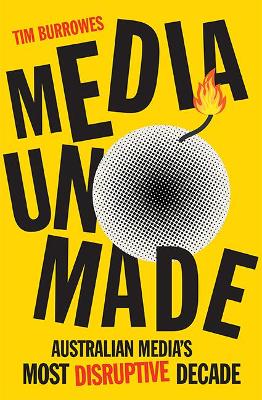 Media Unmade presents the definitive story of the decade in which big media in Australia was cut down to size - a decade that forever altered what had until then been perceived as the unbreachable foundations of the industry in this country. Drawing on insights from his ringside seat, independent journalist, commentator and Mumbrella founder Tim Burrowes knits together the big events and conversations with key players then and now to reveal the drama and tell the stories behind the changes that every consumer of Australian media has witnessed over the past decade.

In this unprecedented account, Tim considers how the newspaper rivers of gold evaporated, TV viewers turned to Netflix, and radio listeners started streaming instead. He covers how networks went broke, the ABC came under sustained attack, and how News Corporation's phone hacking drama in the UK delivered Rupert Murdoch to the most humble day of his life.

Of course there is no drama without people and as much as Media Unmade is the tale of the fluctuating fortunes of some of the country's best-known companies, it also presents the compelling stories of the powerful personalities who have shaped them - from the Murdochs, to Antony Catalano and Greg Hywood, to Kim Williams and James Packer, Gina Rinehart, Alan Jones, Michelle Guthrie, Justin Milne and Kerry Stokes.

Against the existential threat embodied by Google and Facebook, Australia's media companies remade their broken business models and plotted takeovers in a battle for survival. And just when the worst seemed to be over, COVID-19 delivered the biggest advertising recession of all time, pushing every media company to the brink.