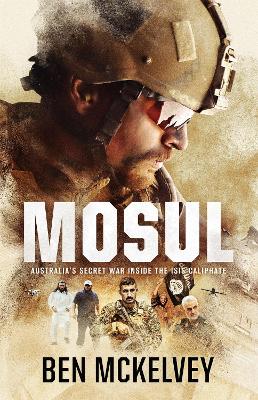 From the best-selling author of The Commando and Born to Fight comes a fascinating investigation of modern warfare that combines methodical research and the fast-paced action of battle with the personal stories of the combatants on both sides of the line.

Taking us from the suburbs of western Sydney and Australia's military army bases, to the battlefields of Afghanistan and Iraq, this is a remarkable book that reveals the as-yet untold story of the battle for Mosul and the secret involvement of Australians on both sides of the war - both our Commandos and Australian ISIS fighters.

Mosul details the rise of ISIS influence in Australia, the Iran and Australia allegiance to fight Daesh and shows what led up to the battle and the ramifications that are still being felt at home - by our soldiers and the victims of that war.

Ben Mckelvey has extraordinary access to SOOCOMD/2COMMANDO units - the most decorated modern Australian fighting unit; ISOF - Iraq's premier fighters; Yazidis women who had been slaves of ISIS; returned Commandos and their devastated families, and explains how petty criminals in Western Sydney became some of our worst jihadists who took their families to Iraq to fight for ISIS. Focusing on the stories of key figures like 2 Commando's Ian Turner and one of Australia's most infamous Jihadist, Khaled Sharrouf, Mckelvey takes us the heart of this brutal battle and brings history to life in an honest, thoughtful and compelling examination of modern warfare.

A must-read for anyone interested in modern military history.