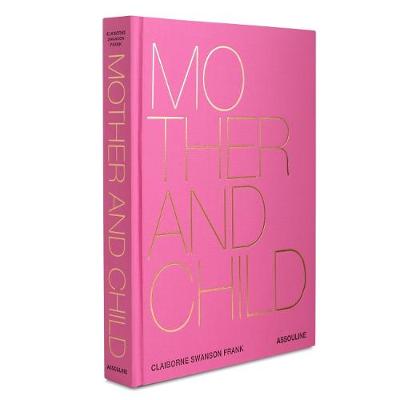 "I hope to share this love that I've witnessed and captured, and those moments of beauty and joy. To remind all of us of the power of motherhood, and that the greatest gift of all is to be loved and to love in return." - Claiborne Swanson Frank In the latest body of work by author and photographer Claiborne Swanson Frank, the artist set out to explore what modern motherhood means in the 21st century. Turning her lens on 70 iconic families of mothers and children from such celebrated names as Del na Figueras, Carolina Herrera, Lauren Santo Domingo, Anne Vyalitsyna, Aerin Lauder, and Patti Hansen, Swanson Frank's stunning portraits capture the emotional bonds and beauty that frame the primal relationship of a mother and her child. Complementing her work is a series of questions-and-answers, in which Swanson Frank delicately tasks each mother to look within themselves and express what being a mother truly means to them. Their answers, while exceedingly thoughtful and introspective, are also amusing, fascinating, and moving. Each one of these deeply intimate and stunning portraits will captivate and inspire readers as they embark on this profound journey that reminds us all of the power of motherhood and the great gift of love. AUTHOR: Photographer Claiborne Swanson Frank was raised in San Francisco, California. Claiborne moved to New York in 2007 and worked at Vogue under Editor-in-Chief, Anna Wintour, leaving the magazine in 2009 before pursuing a career in photography. In 2010, Claiborne began her rst body of work, a collection of portraits of women in her life, which served as inspiration for her best-selling debut book, American Beauty, published in the spring of 2012. Soon after its release, Swanson moved to Los Angeles and began working on Young Hollywood, her second book of portraits, released in the Fall 2014. In tandem with the creation of her books, Claiborne collaborates with American and European fashion brands, and most recently worked with Cle de Peau Beaute as she photographed her book, Mother and Child. Claiborne also contributes to various editorial publications. 100 illustrations