No Front Line Australian Special Forces at war in Afghanistan 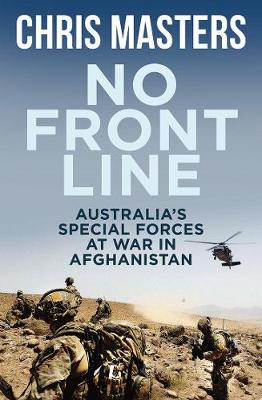 The soldiers of the SAS, the Commandos and Special Operations Engineer Regiment are Australia's most highly trained soldiers. Their work is often secret, their bravery undeniable and for thirteen years they were at the forefront of Australia's longest war. Shunning acclaim, they are the Australian Defence Forces' brightest and best skilled.

In an extraordinary investigation undertaken over ten years, Chris Masters opens up the heart of Australia's Special Forces and their war in Afghanistan. He gives voice to the soldiers, he takes us to the centre of some of the fiercest combat Australia has ever experienced and provides the most intimate examination of what it is like to be a member of this country's elite fighting forces. But he also asks difficult questions that reveal controversial clouds hanging over our Special Operations mission in Afghanistan.

For Australia, there is no more important war to examine in detail. Afghanistan lives in our recent past and will continue to occupy our future. Masterfully told, No Front Line will find a place as one of Australia's finest books on contemporary soldiering.

'In this remarkable book about the intense combat environment experienced by our soldiers in Afghanistan, Chris Masters captures the highs, the lows, the courage and the sacrifice of Australian warriors and their loved ones in our longest war.' - Air Chief Marshal Sir Angus Houston AK, AFC (Ret'd)

'This book tells a story that many of us had not told our loved ones and will no doubt help to articulate and heal all those who sacrificed much in and out of uniform.' - Commando Warrant Officer

'I was impressed by [No Front Line's] detail, quality and objectivity...I wanted to reassure you that most Regiment members understand this and are speaking positively about the book.' - Former SASR Patrol Sergeant

'Thank you Chris Masters for your dedication and attention to detail in documenting this most comprehensive story of Australian Special Forces in Afghanistan.' - Former Commando corporal

'I have always felt that 90% of the blokes in the unit would be supportive of the book...' - SASR Troop Sergeant

'Brilliant. There's seriously no one else in Australia with the knowledge that Chris Masters has in relation to Australian Special Forces in Afghanistan. Lots of lessons learned and examples of heroism that if not for Chris Masters would be lost forever.' - Former Commando Major

'Thanks for your professionalism and intellectual honesty. It is much needed in this space.' - Former SASR Trooper

'Well done. Great to see the boys being recognised for their sacrifice.' - Former Commando Lance Corporal

'I think you captured the feelings of many of us at the end of that deployment perfectly.' - Former Special Forces Major