Not That I d Kiss a Girl 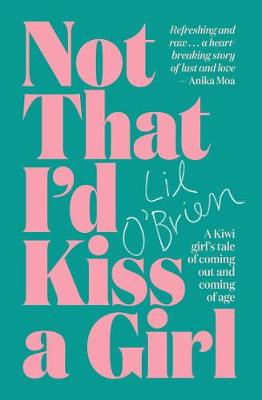 'An absorbing, funny, bittersweet read ... it gives straight New Zealanders a keyhole window in the reality of LGBT life in this country.' Feby Idrus, The Otago Daily Times

Lil O'Brien accidentally outed herself to her parents at the age of nineteen when they overheard her talking to a friend about liking girls. Half an hour later she found herself on the side of the road, with instructions to come back and pick up her suitcase the next day.

What follows is a heartbreaking yet hugely funny story of a young Kiwi girl - the deputy head girl from a posh private school - coming to grips with her sexuality in the face of stark disapproval from her parents.

Bit by bit, Lil finds the inner strength to pull herself into an entirely new world. Along the way she's called out for looking too straight in a gay bar, tries to break in to the lesbian in-crowd and figures out how to send her internet lover back to America. She falls in lust over a knotted soccer shoelace, explores how the hell to have sex with a girl and dates four women at once - unsuccessfully.

Lil's story is an insightful and honest look at how you figure out whether you're gay, bi or whatever - and deal with what comes next. It's an essential read for anyone who's had to fight for who they are and what they believe in.