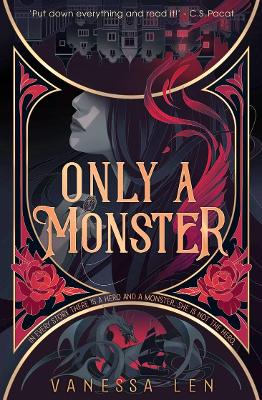 Don't forget the rule. No one can know what you are. What we are. You must never tell anyone about monsters.

Only a monster would kill a hero. Right?

Every family has its secrets, but the summer Joan Chang-Hunt goes to stay with her Gran in London, she learns hers is bigger than most. The Hunts are one of twelve families in London with terrifying, hidden powers.

Joan is half-monster. And what's more, her summer crush Nick isn't just a cute boy - he's hiding a secret as well; a secret that places Joan in terrible danger.

When the monsters of London are attacked, Joan is forced on the run with the ruthless Aaron Oliver, heir to a monster family who are sworn enemies of her own. Joan is drawn deeper into a world that simmers with hostilities, alliances and secrets. And her rare and dangerous power means she's being hunted. She'll have to embrace her own monstrousness if she is to save herself, and her family. Because in this story . . .

'Vanessa Len's world of monsters and heroes is like nothing I've ever read, utterly fresh and unique. It's a page-turning YA adventure with breathtaking twists and a rich, dangerous setting. I loved the girl antihero at its centre, and the depth of the themes that it tackles. But most of all I love the way it turns the genre on its head. Put down everything and read it!' - CS Pacat

'Only a Monster is captivating and unique and - dare I say it - utterly monstrous (in the best possible way). This engrossing debut will have YA readers longing to steal time just so they can devour the pages over and over again!' - Lynette Noni