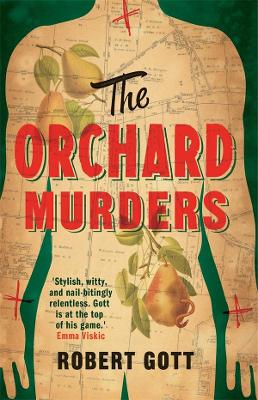 A novel about revenge, obsession, and the dangerous gullibility of religious fanatics.

A novel about revenge, obsession, and the dangerous gullibility of religious fanatics.

In 1944, in the outer-Melbourne suburb of Nunawading, a brutal triple murder heralds the return of a long-forgotten cult. A man named Anthony Prescott has declared himself the Messiah and has promised his followers immortality. There are those who believe him and who are ready to kill in his name. Inspector Titus Lambert of the Melbourne Homicide unit, whose detectives are over-stretched, requests the discreet assistance of Helen Lord and Joe Sable, once members of his unit, now private inquiry agents. The investigation is more perilous than any of them realise, and will have tragic consequences.

The Orchard Murders is the fourth novel in Robert Gott's acclaimed series, set in Melbourne during the dark days of the Second World War.

'Stylish, witty, and nail-bitingly relentless. Gott is at the top of his game.'
-Emma Viskic, author of the Caleb Zelic series and Darkness for Light