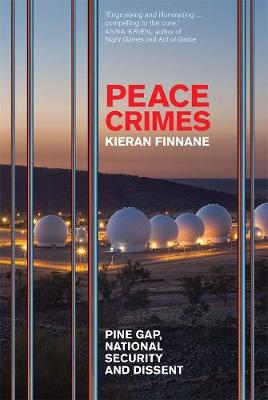 At the closely guarded and secretive military facility, Pine Gap in Australia's Northern Territory, police arrest six nonviolent activists. Their crime- to step through a fence, lamenting and praying for the dead of war.

They call themselves Peace Pilgrims. The Crown calls them a threat to national security and demands gaol time. Their political trials, under harsh Cold War legislation, tell a story of obsessive Australian secrecy about the American military presence on our soil and the state's hardline response to dissent. In Peace Crimes, Alice Springs journalist Kieran Finnane gives a gripping account of what prompts the Pilgrims to risk so much, interweaving local events and their legal aftermath with this century's disturbing themes of international conflict and high-tech war. She asks, what responsibilities do we have as Australians for the covert military operations of Pine Gap and what are we going to do about them?