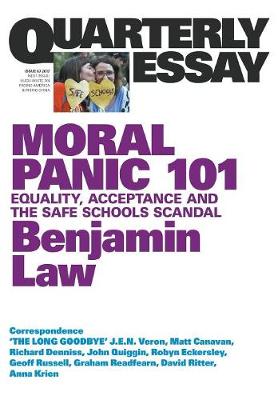 In 2016, the Safe Schools program became the focus of an ideological firestorm. In Moral Panic 101, Benjamin Law explores how and why this happened. He weaves a subtle, gripping account of schools today, sexuality, teenagers, new ideas of gender fluidity, media scandal and mental health.In this timely essay, Law also looks at the new face of homophobia in Australia, and the long battlefor equality and acceptance. Investigating bullying of the vulnerable young, he brings to light hiddenworlds, in an essay notable for its humane clarity."To read every article the Australian has published on Safe Schools is to induce nausea. This isn?t even a comment on the content, just the sheer volume ... And yet, across this entire period, the Australian - self-appointed guardian of the safety of children - spoke to not a single school-aged LGBTIQ youth. Not even one. Later, queer teenagers who followed the Safe Schools saga told me the dynamic felt familiar. At school, it?s known as bullying. In journalism, it?s called a beat-up." Benjamin Law, Moral Panic 101