Robert Menzies The Art of Politics 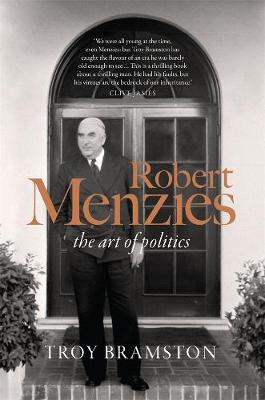 Robert Menzies claimed the prime ministership in 1939 and led the nation during the early years of the war, but resigned two years later when he lost the confidence of his party. His political career seemed over, and yet he staged one of the great comebacks to forge a new political party, devise a new governing philosophy, and craft a winning electoral approach that as to make him Australia's longest-serving prime minister.

The lessons Menzies learned - and the way he applied them - made him a model that every Liberal leader since has looked to for inspiration. But debate over Menzies' life and legacy has never settled.

Who was Robert Menzies, what did he stand for, what did he achieve? Troy Bramston has not only researched the official record and published accounts, but has also interviewed members of Menzies' family, and his former advisers and ministers. He has also been given exclusive access to family letters, as well as to a series of interviews that Menzies gave that have never been revealed before. They are a major historical find, in which Menzies talks about his life, reflects on political events and personalities, offers political lessons, and candidly assesses his successors.

Robert Menzies is the first biography in 20 years of the Liberal icon - and it contains important contemporary lessons for those who want to understand, and master, the art and science of politics.

'It is a handsome publication, with a cover photo of an avuncular Menzies early in his second prime ministership and gold lettering befitting his historical stature ... Menzies has always been controversial, a hero to some and a villain to others. Bramston steers a middle course, judging him to be more substantial than his critics allow and with more faults than his admirers admit.'
-Judith Brett, Sydney Morning Herald

'Robert Menzies- The Art of Politics is always judicious and balanced, providing a multifaceted portrait of a key figure of Australian history. This is essential reading for students of politics and history, or anyone interested in the Liberal Party and its deep national influence.'
-Chris Saliba, Books+Publishing

'Bramston's success in Robert Menzies- The Art of Politics lies in his transcendence of "partisan ideology or mockery". He offers not so much a conventional life portrait but, rather, a consideration of what Menzies called the "art of politics". His interest is in how Menzies "practised politics" rather than the "enduring nature of his policies" ... His book is in some ways reflecting the contemporary yearning for a more substantial political leadership just as much as it is an attempt to get to the heart of what made Menzies tick.'
-James Curran, Weekend Australian