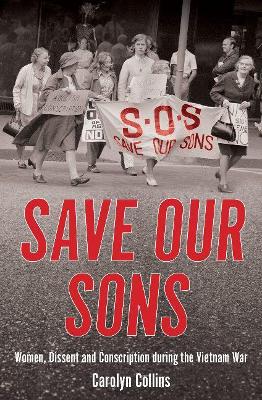 Save Our Sons tells for the first time the full story of the Save Our Sons movement of Australian women who banded together to oppose conscription during the Vietnam War.

In 1965, angered by the Menzies' government's decision to conscript young men to fight in the Vietnam War, a group of Sydney housewives issued a national 'distress call - SOS - to mothers everywhere'. Their clarion call was answered by women across Australia, who formed groups of their own in Townsville, Brisbane, Newcastle, Wollongong, Melbourne, Adelaide and Perth. Of varying ages, backgrounds and religious and political persuasions, they united under the Save Our Sons banner, determined to end the so-called 'lottery of death'. In 1965, nobody envisaged this would take eight long years, or that some would be jailed in the process.

SOS members initially stood out as respectable voices of middle-class dissent in their sensible shoes, hats and gloves, but as the war dragged on some became more radical: staging sit-ins at government buildings, chaining themselves to Canberra's Parliament House, wearing anti-war fashions to the Melbourne Cup, hijacking an evangelical rally, and organising an 'underground' to hide draft resisters. In 1971, the jailing of five Melbourne SOS mums over Easter sparked national outrage, and was seen by some as a turning point in the anti-war campaign. Set against a backdrop of percolating social change in Australia, Save Our Sons is the first national history of the SOS movement and those who answered its call.