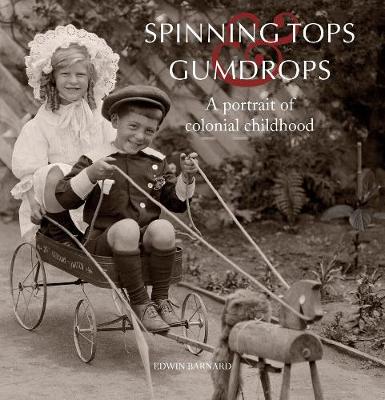 Spinning Tops & Gumdrops captures a time when 'imagination, skill, and daring' was the source of
children's play. Quoits and jacks, hide and seek,
cricket with a kerosene tin for a wicket, dress ups and charades, can all be
seen in these appealing images. Children climb trees, run races, and build
rafts to sail on the local waterhole, happily absorbed in the play of their own
making.

This was also a time when school yard disagreements
were sorted out with fists and 'the loss of a little claret'. A time when children could view public
hangings, and premature death was frequent, especially taking the very young
and vulnerable though dysentery, whooping cough, or diphtheria. The word
'mollycoddled' has its origins in the mid-nineteenth century, but
certainly cannot be applied to the colonial children depicted in Spinning Tops & Gumdrops.

Children were often required to work - many at
adult jobs - to the neglect of their education, and photographs show children
taking part in rural life, tending animals, milking, and harvesting crops. In
the cities, too, we see factories using cheap child labour to satisfy the
increasing demand for mass produced shoes and clothes, to bake bread, and to
process food. Many youngsters found
themselves 'in service' to the growing middle class. One story is told of an
innovative girl who earned pocket money by collecting leeches for the local
doctor.

There were
distinctive gender roles in colonial Australia, and associated dress
conventions. As a practical solution to ease toilet training, boys generally
wore dresses until five or six years of age, seen in the photographs shown
here. Only then they were 'breeched' that is, put into breeches. Meanwhile,
girls' dresses became longer as they approached womanhood, coinciding with a
greater emphasis on modest behaviour and a reshaping of their activity and
education to gain home-making skills.

The lasting impression left by the
contemporary accounts, photographs, etchings, and paintings of colonial children in Spinning Tops & Gumdrops is their
possession of qualities of resilience, self-sufficiency, and acceptance of their
lot. Perhaps it was through lack of choice, or of knowing no other. Nevertheless,
these were qualities that put them in good stead for the challenges many faced
in their adulthood. Interestingly, these are qualities on which contemporary
society still places a high value, but which today seem a little more elusive.