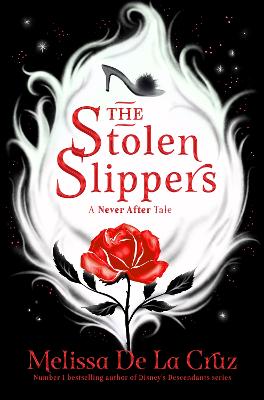 The Stolen Slippers is the second title in the Never After series, a funny and exciting fantasy adventure where real life and fairy tales collide. Melissa de la Cruz, the bestselling author of Disney's Descendants series, expertly twists Cinderella and Beauty and the Beast for readers of 10+. Perfect for fans of Disney's Twisted Tales and the first title in the series, The Thirteenth Fairy.

Filomena Jefferson-Cho teams up once more with dashing Jack Stalker, adorable Alistair and glamorous Gretel for another adventure in the land of Never After, this time to get the glass slipper back from Cinderella!

And we're about to learn who Cinderella really is. Neither a heroine or a victim, Cinderella is manipulative and cunning, and will do anything to be the princess of Eastphalia. The true heroes are her twin stepsisters, Hori and Bea, who have been much maligned in reputation and whose lives have been effectively upended by their younger stepsister! For one, Prince Charming has been in love with Hori since they were children, but when King Gregor forces his son to throw a ball to pick a bride, Cinderella steals the spotlight and her happily-ever-after.

While attempting to help her sister, bookish Bea is captured by a terrible beast. Spells abound, ogres are unleashed, and evil will reign . . . or will it?

Only time and the bravery of Filomena's gang will tell!