Tis The Doing Not The Deed 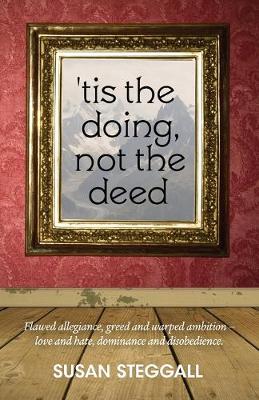 'Tis the doing, not the deed, follows Apolline a headstrong French lawyer, and her mild-mannered Australian husband, Parry, an investigator for an art auction house, as they investigate the provenance of paintings (belonging to a deceased estate) by two 20th-century Australian artists, before the works are put up for sale. There is also uncertainty regarding the provenance of similar works in museums that were victims of Nazi appropriation during World War II. In that deceased (Styming) estate there are not only artworks missing but also one of the heirs. Apolline flies to London to finalise the Styming inheritance only to be held prisoner by three of the heirs who demand she allocate them greater shares of their father's wealth. Apolline is rescued, the Styming heirs are arrested and the family's art collection withdrawn from auction. Six months later, while Parry is visiting his seriously-ill mother in Australia, the mysteries surrounding the Styming art collection re-surface. Although Apolline has promised Parry not to risk her safety again by trying to find the missing artworks, she cannot resist the temptation and is caught in a dangerous intrigue that leads to a dramatic and explosive conclusion: the artworks are found and saved but the Styming house is destroyed. More dangerous yet, is the moment when Apolline faces the white-hot fury of Parry who learns of her activities. 'Tis the doing, not the deed combines flawed allegiance, greed and warped ambition in a tale of love and hate, dominance and disobedience that spans a century: from World War I to the present day.