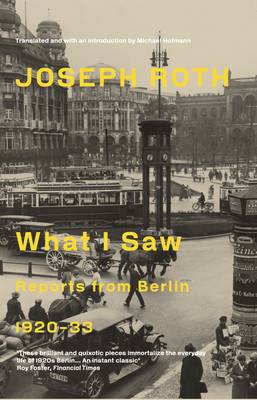 In 1920, Joseph Roth, the most renowned German correspondent of his age, arrived in Berlin, the capital of the Weimar Republic. He produced a series of impressionistic and political writings that influenced an entire generation of writers, including Thomas Mann and the young Christopher Isherwood. Roth, like no other German writer of his time, ventured beyond Berlin's official veneer to the heart of the city, chronicling the lives of its forgotten inhabitants - the Jewish immigrants, the criminals, the bathhouse denizens, and the nameless dead who filled the morgues. Warning early on of the threat posed by the Nazis, Roth evoked a landscape of moral bankruptcy and debauched beauty, creating in the process an unforgettable portrait of a city.