Why Are We Yelling: The Art of Productive Disagreement 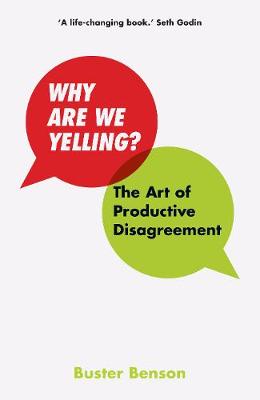 Why Are We Yelling is the essential book about how to turn arguments into a productive and enjoyable dialogue rather than a bad-natured confrontation.

The way we argue is broken - whether we're arguing about immigration, the existence of ghosts, the best burger in the city, or who's allowed to sit in your favourite chair. We end up digging in our heels and yelling at one another or choosing to avoid heated topics entirely. Either way, problems continue to fester under the surface and inevitably return as even bigger problems later on. There has to be a better way.

Buster Benson, a Silicon Valley entrepreneur with two-decades of experience facilitating hard conversations at some of the biggest and most controversial tech companies in the world, is on a mission to help us see disagreement differently. He recommends 10 things to try in order to make disagreements more productive. The way we talk is laden with old conversational habits that need to be re-examined - and by practicing these 10 new habits we can flip frustrating, unproductive disagreements into ones that bear fruit and bring people closer together. Instead of dreading arguments, or avoiding them at all costs, we'll even start looking forward to them as one of the most rewarding parts of our lives.

In this book you'll learn practical skills to make your disagreements more fruitful by:

* Learning to see and appreciate four other fruits of disagreements that are more valuable than "winning", and easier to harvest.
* Identifying the kind of argument you're having so you can know how to best approach it.
* Articulating the best possible version of your opponent's argument before attacking it.

With this toolkit, we can learn to see the world as a less frustrating and more interesting place. Gone will be the days of mentally gearing up to attack people and defending ourselves from people we disagree with. Instead, we can explore more possibilities and perspectives in the world, simply because we'll no longer be afraid to wade into scary topics of conversation.