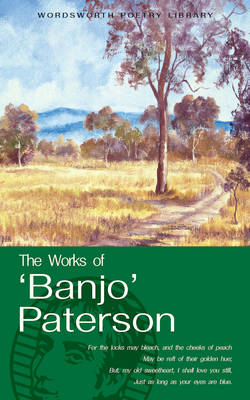 "Banjo" Paterson may be regarded as Australia's national poet. The apparent simplicity of the ballad form is balanced by many syllabic irregularities and ingenuity of stress and internal rhyme. His works include "Waltzing Matilda" and "The Man from Snowy River". AUTHOR: Banjo Paterson was born at Narambla, near Orange, New South Wales, the eldest son of a Scottish immigrant from Lanarkshire on February 17, 1864. Paterson's family lived on the isolated Buckinbah Station until he was 5. When Paterson's uncle died, his family took over the uncle's farm in Illalong, near Yass. When Paterson turned 10 he was sent to school at Sydney Grammar School, performing well both as a student and a sportsman. Leaving school at 16, he took up the role of an articled clerk in a law firm and by the age of 23 Paterson was a fully qualified solicitor In 1885, Paterson began submitting and having his poetry published in the Sydney edition of The Bulletin under the pseudonym of "The Banjo", the name of a favourite horse. Paterson, like The Bulletin, was an ardent nationalist, and in 1889 published a pamphlet, Australia for the Australians which told of his disdain for cheap labour and his admiration of hard work and the nationalist spirit. In 1890, The Banjo wrote "The Man from Snowy River", a poem which caught the heart of the nation, and in 1895 had a collection of his works published under that name. This book is the most sold collection of Australian Bush poetry and is still being reprinted today.A B (Banjo)Paterson also became a journalist, lawyer, jockey, soldier and a farmer. In 1903 he married Alice Walker in Tenterfield. Their first home was in Queen Street, Woollahra. The Patersons had two children, Grace born in 1904 and Hugh born in 1906. He would later become a war correspondent for The Sydney Morning Herald during the Second Boer War, the Boxer Rebellion and World War I.