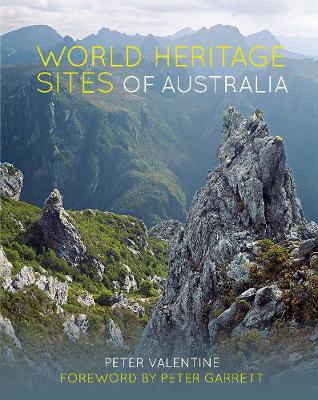 Visitors to Australia
marvel when they see the places recognised by the United Nations as World
Heritage. From the ancient, pristine temperate rainforests in the south to the
massive escarpments and tropical wetlands in the north, they are dazzling in
their ecological complexity and the record they offer of life on this planet
and the human experience in Australia.

Peter Valentine presents
Australia's 19 World Heritage sites in a magnificent tribute to natural and
cultural history. The outstanding qualities of each site are described and
illustrated in exquisite detail, along with an account of how the site came to
be on the World Heritage List. In many cases, the path towards listing was not
straightforward, with the Australian Government having to exercise its
constitutional powers against other parties with vested interests in using
sites for other purposes, including forestry and mining.

Rainforests that show
the connections of the ancient supercontinent Gondwana. Rock art that points to
a history of human settlement reaching over 60,000 years into the past.
Sandstone remnants of eighty years of convict labour and imprisonment. A marvel
of twentieth-century architecture. This is Australia's world heritage.

In a thoughtful
foreword, former minister for the environment, heritage and the arts and
Midnight Oil lead singer Peter Garrett describes his own experience of these
wonders and concern for their continued existence.