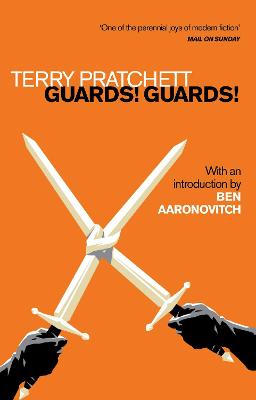 One of the new PB editions of three classic Discworld novels introducing new readers to the wonderful world of Terry Pratchett.

First book of the original and best CITY WATCH series, now reinterpreted in BBC's The Watch

Insurrection is in the air in Ankh-Morpork. The Haves and Have-Nots are about to fall out all over again. Captain Sam Vimes of the city's ramshackle Night Watch is used to this. It's enough to drive a man to drink. Well, to drink more. But this time, something is different - the Have-Nots have found the key to a dormant, lethal weapon that even they don't fully understand, and they're about to unleash a campaign of terror on the city. Time for Captain Vimes to sober up.