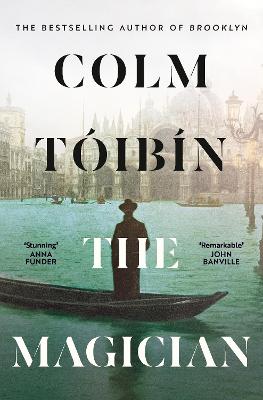 When the Great War breaks out in 1914 Thomas Mann, like so many of his fellow countrymen, is fired up with patriotism. He imagines the Germany of great literature and music, which had drawn him away from the stifling, conservative town of his childhood, might be a source of pride once again. But his flawed vision will form the beginning of a dark and complex relationship with his homeland, and see the start of great conflict within his own brilliant and troubled family.

Colm Toibin's epic novel is the story of a man of intense contradictions. Although Thomas Mann becomes famous and admired, his inner life is hesitant, fearful and secretive. His blindness to impending disaster in the Great War will force him to rethink his relationship with Germany as Hitler comes to power. He has six children with his clever and fascinating wife, Katia, while his own secret desires appear threaded through his writing. He and Katia deal with exile bravely, doing everything possible to keep the family safe, yet they also suffer the terrible ravages of suicide among Thomas's siblings, and their own children.

In The Magician, Colm Toibin captures the profound personal conflict of a very public life, and through this life creates an intimate portrait of the twentieth century.

PRAISE FOR THE MAGICIAN

'This graceful novel is a moving and intimate portrait by one master of another . . . It is a stunning tribute to the great man, and a vital story for now.' - Anna Funder

'The Magician is a remarkable achievement. Mann himself, one feels certain, would approve.' - John Banville

'As with everything Colm Toibin sets his masterful hand to, The Magician is a great imaginative achievement - immensely readable, erudite, worldly and knowing, and fully realized.' - Richard Ford

'No living novelist dramatizes artistic creation as profoundly, as luminously, as Colm Toibin, or conveys so well the entanglement of imagination and desire.' - Garth Greenwell

'What Mr. Toibin's exquisitely sensitive novel gets right, in a way that biography rarely does, is its acknowledgment of unknowability... one of the most sublime endings I've come across in a novel in a long time.' - The Wall Street Journal

'Extensively researched and lyrically wrought...a complex but empathetic portrayal of a writer in a lifelong battle against his innermost desires, his family and the tumultuous times they endure.' - Time, Best Books of Fall 2021

'It's hard not to talk about Colm Toibin's latest novel, The Magician, in the loftiest of terms, as something staggering, or dazzling, or an achievement . . . these accolades feel deserving . . . [a] vast and stunningly realized world . . . you'll find yourself savoring every page.' - Vogue

'a work of huge imaginative sympathy . . . quite thrilling . . . It takes a writer of Toibin's caliber to understand how the seemingly inconsequential details of life can be transmogrified, turned into art . . . an epic story of exile and literary grandeur' - Jay Parini, The New York Times Book Review

'An incisive and witty novel . . . it canters along not only on the strength of Toibin's graceful prose, but also because the reader can hardly wait for the next bon mot from a family member or guest.' - Washington Post

'I got enormous pleasure from Colm Toibin's The Magician . . . frighteningly relevant now as we see fascism make an impossible return. It is a vast, original, emotionally complex novel' - Peter Carey

'Colm Toibin's novel The Magician, about the complicated life and times of Thomas Mann, is another masterful work from Ireland's own magician.' - Damon Galgut