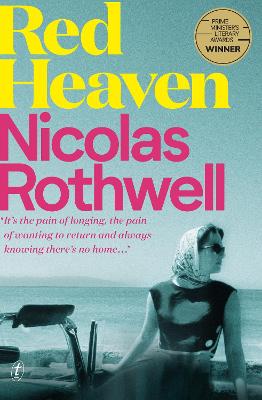 A monumental and gripping story, Red Heaven is a glamorous tale of a child with two fascinating and domineering guardians, inspired by the author's own childhood.

Red Heaven is the story of a child's journey to adulthood, his loss of those he loves and his fixing of them in memory. It begins in the late 1960s in Switzerland, as the boy's ideas about life are being shaped by two rival influences.

These are his so-called aunts-imperious, strong-willed, ambitious-both exiles, at the mercy of outside political events; both determined to make the boy into their own heir, an inheritor of their values. In self-contained episodes, each set in an alpine grand hotel, we see one aunt and then the other educate their protege.

Serghiana, the 'red princess', is the daughter of a Soviet general, a producer of films and worshipper of art, a true believer. Ady, a former actress and singer, is a dilettante and cynic, Viennese, married to a great conductor- in her eyes, all is surface, truth a mere illusion.

Memory and nostalgia-the aunts' gifts to the boy, gifts of obligation-are the purest expression of love allowed them. Gradually he comes to understand the shadows in their past. Their stories stay with him, guiding his path through adolescence, until he can absorb the influences of the wider world.

Red Heaven is about the people who make us what we are- how they come into our lives, affect us, then depart the stage. This fiction, alive to the elusive beauties and sadnesses of the world, is Nicolas Rothwell's finest achievement.