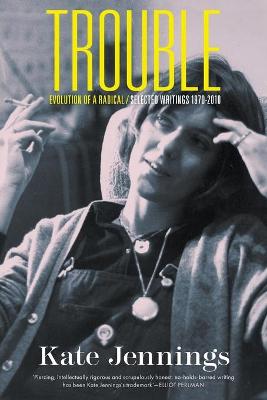 In 1970 Kate Jennings, twenty-one, stunned a Sydney anti-war rally into silence with a pull-no-punches speech calling for women's empowerment. Brave, impassioned and searingly funny, it set the tone for an unconventional life. A few years later she was on her way to New York, where she would make her name as a writer, fall in love and, as a Wall Street speechwriter, enjoy ringside seats at some of the strangest events of our times.
Trouble collects Jennings' best short work from the last four decades. She writes incisively about manners and morals, politics and economics, feminism and the writing life. She describes America with the keen eye of an outsider, and looks back at Australia with an expatriate's frankness.
Trouble is both a fragmented autobiography and a record of remarkable times. From the protest movements of the 1970s, via Wall Street's heyday and dramatic collapse, to the historic election of Barack Obama, Jennings captures the shifts - seismic and subtle, personal and political - that brought us to where we are now.