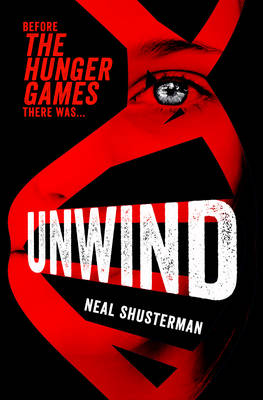 In a society where unwanted teens are salvaged for their body parts, three runaways fight the system that would 'unwind' them.? Perfect for fans of THE HUNGER GAMES.

Unwinding: the process by which a child is both terminated and yet kept alive. Unwinding is now a common, and accepted, practice in society.

Connor's parents want to be rid of him because he's a troublemaker.
Risa has no parents and is being unwound to cut orphanage costs.
Lev's unwinding has been planned since his birth as part of his family's strict religion.

Brought together by chance, and kept together by desperation, these unlikely companions make a harrowing cross-country journey, knowing their lives hang in the balance.

If they can survive until their 18th birthday, they can't be harmed - but when every piece of them, from their hands to their hearts, is wanted by a world gone mad, eighteen seems far, far away...

"Gripping, brilliantly imagined futuristic thriller... The issues raised could not be more provocative - the sanctity of life, the meaning of being human - while the delivery could hardly be more engrossing or better aimed to teens."Publishers Weekly, starred review
"A thought-provoking, well-paced read that will appeal widely"School Library Journal, starred review
"A breathless tale turning pages for teenage boys, as it challenges not just where life begins and ends, but what it means to be alive." Educ8 magazine
"a powerful, shocking, and intelligent novel... It's wonderful, wonderful stuff." The Bookbag
"This is the kind of rare book that makes the hairs on your neck rise up. It is written with a sense of drama that should get it instantly snapped up for film." The Times