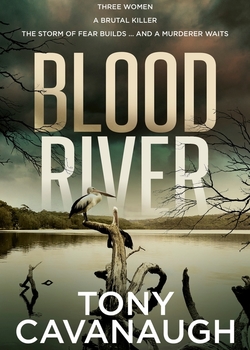 Join us for refreshments and nibblies with Tony Cavanaugh in conversation with Jo Riccioni. Tony will be discussing his new book Blood River.

Three women. A city in fear. And a killer who will alter them all.

If you love the atmosphere of SCRUBLANDS, the mystery of NOWHERE CHILD and the storytelling of THE BROKEN SHORE you will love BLOOD RIVER!

Brisbane 1999. It's hot. Stormy. Dangerous. The waters of the Brisbane River are rising. The rains won't stop. People's nerves are on edge. And then . . .

A body is found.  And then another.
And another.

A string of seemingly ritualised but gruesome murders. All the victims are men. Affluent. Guys with nice houses, wives and kids at private schools. All have had their throats cut. Tabloid headlines shout, THE VAMPIRE KILLER STRIKES AGAIN!
Detective Constable Lara Ocean knows the look. The 'my-life-will-never-be-the-same-again look'. She's seen it too many times on too many faces. Telling a wife her husband won't be coming home. Ever again. Telling her the brutal way he was murdered. That's a look you never get used to.

Telling a mother you need her daughter to come to the station for questioning. That's another look she doesn't want to see again.

And staring into the eyes of a murderer, yet doubting you've got it right. That's the worst look of all - the one you see in the mirror. Get it right, you're a hero and the city is a safer place. Get it wrong and you destroy a life. And a killer remains free. Twenty years down the track, Lara Ocean will know the truth.

Tony Cavanaugh is an Australian crime novelist, screenwriter and film and television producer. He has over thirty years' experience in the film industry, has lectured at several prestigious universities and has been a regular guest on radio commenting on the film and television industry. His Darian Richards novels which include PROMISE, DEAD GIRL SING and THE TRAIN RIDER, have been highly praised.