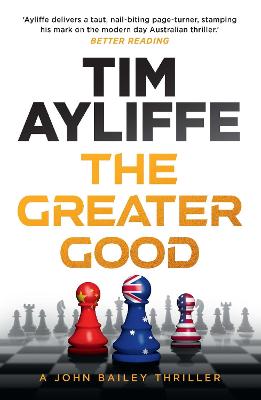 He had never killed anyone who hadn't deserved it. The means always justified the end. He didn't need forgiveness. He needed justification. The greater good.
Battered war correspondent John Bailey is a man living on the edge. He's haunted by nightmares of being kidnapped and tortured in Iraq and he's drinking too much to drown the memories. As he battles to get his life back together, a story breaks that will force him back into the spotlight - and into the crosshairs of a deadly international player.

When a beautiful prostitute is found murdered in her luxury apartment, Bailey is ordered to cover the story by The Journal's editor and his old friend, Gerald Summers, because he can't trust anyone else.

One of the victim's clients, a key advisor to the Defence Minister, is chief suspect in her murder and he's on the run. When he contacts Bailey, claiming to have information that will bring down the government, the stakes become deadly. To complicate matters, the investigating police detective is the woman Bailey walked out on a decade ago.

When a ruthless CIA fixer turns up, followed by a murderous Chinese agent hot on his trail, Bailey realises he has stumbled onto the story of a lifetime - one that he may not live to tell.

'A crime thriller with the lot: murder, deceit, corruption and a hint of romance ... Ayliffe takes you deep inside the worlds of politics and the media, with a heavy dose of international intrigue thrown in' Michael Rowland

'If Rake were a journalist, with a talent that equals his capacity to survive being beaten up, Bailey would be him' Julia Baird

'An absolute cracker of a thriller' Chris Uhlmann

'Another brilliantly crafted thriller from Ayliffe that fits perfectly in today's worrying world ... Verdict: Get this guy on TV' Herald Sun

'Sharp, incisive and scarily prescient, I was hooked from the first chapter to the final page' Sara Foster, bestselling author of The Hidden Hours

'Utterly compelling and terrifyingly timely. I could not put it down' Pip Drysdale, bestselling author of The Sunday Girl

'As a correspondent, I lived this world. Tim Ayliffe has written it' Stan Grant, writer and broadcaster