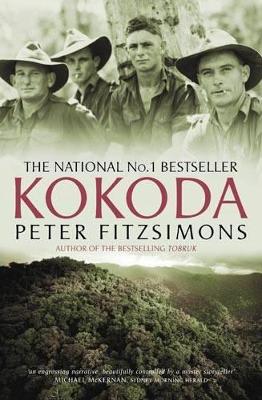 Acclaimed bestselling author Peter FitzSimons tells the Kokoda story in a gripping, moving story for all Australians: Kokoda is the iconic battle of World War II, yet few people know just what happened - and just what our troops achieved.

'for Australians, the battles in Papua New Guinea were the most important ever fought' Paul Keating

'This reads like fiction, but it is all fact.' Lieutenant Allan 'Kanga' Moore, 39th Battalion

'It was just a series of muddy footholds in the mountainside . . . so slippery that you had to sling your rifle and leave your hands free to grab the nearest vine or branch as your feet slid from under you . . . so steep that in some places you could scale the mountain face only by using both hands and both feet . . . so muddy that at times you sloshed through a quagmire more than ankle deep and felt the cloying mud suck your feet back at every step. That was the track they were fighting for down there.' Chester Wilmot (from a despatch banned by Commander-in-Chief Sir Thomas Blamey's headquarters)