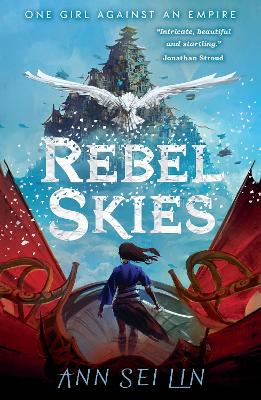 "Featuring a vivid mythology, spectacular battles, and an endlessly surprising heroine, Rebel Skies is as intricate, beautiful and startling as one of the paper spirits Kurara brings to life." Jonathan Stroud

"A magical debut that reads like a Ghibli film, brimming with imagination, action and heart." Natasha Ngan

"An intricately constructed ode to papercraft and Japanese culture. I fell in love with this world of airships, cumulous whales and floating cities. Pure magic." Lauren James

A beautifully written and pacy teen fantasy adventure, set in a world of flying ships, sky cities and powerful paper spirits. Inspired by Asian cultures and exploring themes of empire, slavery and freedom.

Kurara has never known any other life than being a servant on board the Midori, but when her party trick of making paper come to life turns out to be a power treasured across the empire, she joins a skyship and its motley crew to become a Crafter. Taught by the gruff but wise Himura, Kurara learns to hunt shikigami - wild paper spirits who are sought after by the Princess.

But are these creatures just powerful slaves, or are they beings with their own souls? And can a teenage girl be the one to help them find their voice - and change the course of an empire?