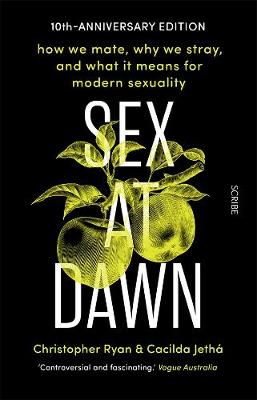 The 10th-anniversary edition of the book that radically re-evaluated the origins and nature of human sexuality.

The 10th-anniversary edition of the book that radically re-evaluated the origins and nature of human sexuality.

Since Darwin's day, we've been told that sexual monogamy comes naturally to our species. Mainstream science - as well as religious and cultural institutions - has maintained that men and women evolved in families in which a man's possessions and protection were exchanged for a woman's fertility and fidelity.

In this groundbreaking book, however, Christopher Ryan and Cacilda Jetha argue that human beings evolved in egalitarian groups that shared food, child care, and, often, sexual partners. Weaving together evidence from anthropology, archaeology, primatology, anatomy, and psychosexuality, the authors show how far from human nature monogamy really is.

With intelligence and humour, Ryan and Jetha explain how our promiscuous past haunts our contemporary struggles. They explore why many people find long-term fidelity so difficult; why sexual passion tends to fade even as love deepens; why homosexuality persists in the face of standard evolutionary logic; and what the human body reveals about the prehistoric origins of modern sexuality.

Shocking, enlightening, and ultimately inspiring, Sex at Dawn offers a revolutionary understanding of why we live and love as we do.

'Sex At Dawn is the single most important book about human sexuality since Alfred Kinsey unleashed Sexual Behaviour in the Human Male on the American public in 1948.'
-Dan Savage, author of the internationally syndicated sex-advice column 'Savage Love' and The Commitment- Love, sex, marriage, and my family

'Sex At Dawn has helped me understand myself and the world so much more clearly.'
-Ilana Glazer, co-creator of Broad City